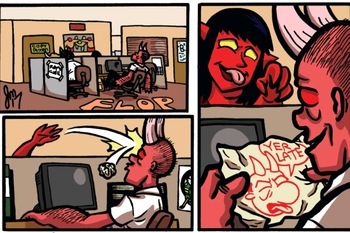 Doug and Bridget enjoying a moment without B.L. Zebub breathing down their necks
Advertisement:

by Jeff Martin is a weekly webcomic about the demons who work at Hell, Inc., the massive corporation in charge of running Hell. The story follows Doug, a low-level office drone, as he tries to eke out whatever happiness he can from the nightmare world he calls home. These attempts at happiness routinely draw the ire of his overbearing boss, B.L. Zebub, who only cares about ascending the ranks of demonic managers until he reaches the hallowed inner circle of Upper Management. Doug's life would probably improve substantially if he could manage to read signals from Bridget, the subject of his hapless romantic interests.

Doug's life is turned upside down when responsibility for the new intern - a damned soul with demonic potential named Sara - is thrust upon him. It turns out being responsible for immortal souls is a really big hassle when they're trying to climb over you on the corporate ladder.