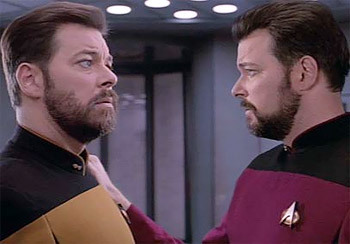 Proving once again that teleporters can do truly anything!
TG: and hey you might even be able to help your past dream self wake up sooner without all that fuss you went through
TT: I think the true purpose of this game is to see how many qualifiers we can get to precede the word "self" and still understand what we're talking about.
— Dave Strider and Rose Lalonde, Homestuck
Advertisement:

The Alternate Self is the same person as the character, but living a separate life. The most common cause is that the two alternate selves live in separate timelines that diverged reasonably recently and were the same or very similar during the person's formative years.

However, in some Speculative Fiction, a Alternate Self can also be created by a Teleporter Accident, or even a extreme case of Cloning Blues, where the clone somehow keeps the personality, skills and memories of the original.

The character and the alternate self (or the two alternate selves, if the plot treats them equally as characters) might have been more or less changed by different circumstances, but they are still the same person at the core. They may or may not be the same age, but they do NOT have a linear relationship of one being the younger self that will become the other — the older self.

An Alternate Self is the opposite of a Mirror Self, and yet they often overlap in a fluid pondering of identity.

In the case of separate timelines, the two alternate selves may or may not be able to share information through Flash Sideways.

When several alternate selves team up against something or someone, it's an Alliance of Alternates. The appearance of an alternate may result in Doppelgänger Gets Same Sentiment or Alternate Personality Punishment. If the alternate self goes by a different name, see Alternative-Self Name-Change.