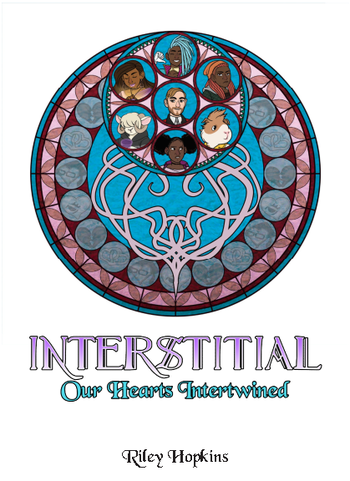 An imperfection in a crystal caused by the presence of an extra atom in an otherwise complete lattice
Advertisement:

Interstitial: Our Hearts Intertwined, often shortened to Interstitial is a Powered by the Apocalypse game made by Riley Hopkins, funded through kickstarter. It's inspired by and legally distinct from Kingdom Hearts.

It's a game about your connections with other people, gathering connections as you travel, and the power drawn from those connections. Player characters form Links with each other based on their relationships: Light links for friends and romantic relationships, Dark links for enemies and rivals, Mastery for those you teach and are taught by, and Heart for those who make you realize something deeper about yourself.

It's also a game designed to be a vehicle for playing out weird crossovers. Much like its inspiration, travel between worlds and dimensions based on existing intellectual properties is an intrinsic part of the game. What's more, playing as existing characters from those worlds is not only allowed but encouraged.

Playbooks are defined not by a character's abilities, but their narrative archetype. The Chosen, The Discarded, The Mystic, and more are available options, with most of their moves designed around furthering their purpose in the story and how such character tropes would rub up against others. They also supply examples of existing characters who inspired such roles. For example, one campaign might see Aang, Lotor, and Qui-Gon Jinn ending up on a world-travelling team together. They could visit the Enterprise and help stave off a Borg attack, then turn into animal forms when they visit Sonic the Hedgehog. Canon is nebulous, and the only limits are the imaginations of the players.

Gameplay is designed to veer wildly from heartfelt to bonkers thanks to the combination of both mechanics. This was demonstrated in the Actual Play playtest podcast, Interstitial: Actual Play, which featured Riley in both campaigns.

The game can be purchased at Linksmith Games