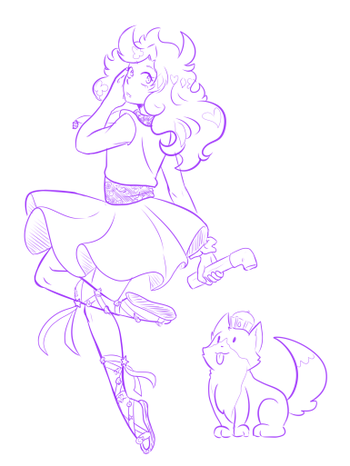 Chloe's first Train outfit and Atticus.
"You [Goh] want a dream, well I have one! I have a dream that I run away from this place and go to a world where there's no such thing as Pokémon, where my dad isn't a researcher and I’m never asked by EVERYONE to follow his job or that I know how to battle. A world that you and I were always best friends and Mew never ever came to take you away. And a world where Ash Ketchum never existed in the first place. If I had that chance to stay in that world for as long as I live, I’d take it because I never want to see any of you [Goh, Ash, and her father] ever again!"
—Chloe Cerise, a few scenes before she gets her wish.
Advertisement:

Taking place before episode 29 of Pokémon Journeys and at the beginning of Book 3 of Infinity Train, the story tells of Chloe Cerise, an insecure young girl who is the daughter of Professor Cerise in Vermillion City. She is is very unsure of her future because everyone at her school thinks that she'll easily follow in her father's footsteps but she honestly doesn't even know if she even likes Pokémon. And after a bad day at school and an even worse afternoon at her father's research lab that leaves her feeling like no one actually cares for her or the fact that she doesn't want a life involving Pokémon, Chloe decides to run away from home. However, before she can form a concrete plan on how to exactly do that and before she can go back to the lab to at least take Yamper with her, she's picked up by a mysterious train and wakes up with a green '151' tattooed on her right hand in something that does not look like the interior of a train.

Thanks to a helpful introduction video made by a spherical robot with two personalities, she learns that she's now in one of many pocket dimensions on the train she boarded and that she can go home once her number drops to zero. However, Chloe sees this as the best thing that could have happened to her. Why would she want to leave the train if all that is waiting for her back in Vermilion City is an ignorant father who cares more about his research than her, her Pokémon obsessed Childhood Friend Goh, Ash "Black Hole" Ketchum who steals everyone's attention, and her classmates who act like her future has already been decided? With the desire to reinvent herself, a goal to never return home and befriending Atticus (King of the Corginians, and Uniter of the Cardigans and the Pembrokes) and Lexi (a book capable of separating his pages into a humanoid form) who serve as her guides, the three — now dubbing themselves the Red Lotus Trio — set forth on a journey to explore what the train has in store for them and in pursuit of a certain cult that has been causing trouble for the peaceful denizens.

All while Chloe is completely unaware of just how concerned her friends and family really are when the only thing they can find is her discarded scrunchie in an alleyway...

The story is not a happy one, deconstructing the anime's tendency to focus only on Ash and Goh's adventures and showing the repercussions that their goals in being with Pokémon have damaged Chloe's self-esteem and sense of worth and how Goh is supposedly her Childhood Friend when the anime shows that he never interacts with her in the slightest. Moreover, it brings up important points on what it means to be a girl in the Pokémon world and the stigma that those who don't like the creatures face.

Blossoming Trail has also inspired multiple fanfics — Infinity Train: Boiling Point being one of them — in regarding the crossover nature of the Infinity Train and struggles many characters face while also heaping on a dash of deconstruction and reality into it.

On December 8th, 2020, the author posted a prequel story, Infinity Train: Knight of the Orange Lily which takes place during the Sun and Moon anime and focuses on Gladion entering the Train to confront the issues he has in regards to what happened with Nihilego all while wanting to prove that he is a true Knight in Shining Armor. The fanfic can be found here

An April Fools faux-sequel story, Infinity Train: Dreams of Indigo, was released on April 1st, 2021. It can be read here

A proper sequel story, Infinity Train: Voyage of Wisteria, has begun and can be found here

On July 11th, 2021, in celebration for the first anniversary of Blossoming Trail, the author has started to create a series of What If? snippets called Infinity Train: Branching Paths that shows what would happen if there were less communication problems and insensitivity all around. It can be found here

“Goodbye Vermilion City. I hope you find someone else to take over my dad’s job.”