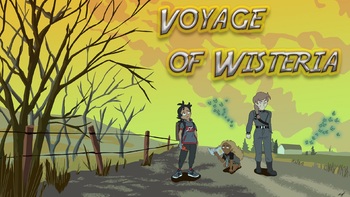 Unmarked spoilers for Blossoming Trail ahead!

Chloe has finally come home... just in time for Goh to heed the call of the Train himself. While he departs on his own 'therapy adventure' riding the rails, she's left trying to navigate the world she's returned to. For much has changed in her absence, and for better or worse, Chloe Cerise is not merely the overshadowed and overlooked daughter of Vermillion City's Pokémon Professor anymore.

But while the Apex may have been disbanded, that doesn't make the Train safe. Not even — or maybe especially not — for the Childhood Friend of the heroine and her friends who helped take down Grace and Simon's cult of murderous children. And safety might not be what Goh's looking for, anyway...

Like Blossoming Trail and Knight of the Orange Lily before it, the central theme talks about healing, redemption and moving on while a subsequent sub-plot talks about how people who have done horrible things must learn to make amends and work on bettering themselves. But what happens if some people don't believe that these people don't deserve a chance to atone? Would that be a disservice to the people that were hurt by their actions? What moral ground is there on an infinite train if the only thing you'll be punished with for hurting others is just a bigger number?

The main story was completed in February 5th, 2022 with the second epilogue chapter (and final chapter in total) released on June 3rd.