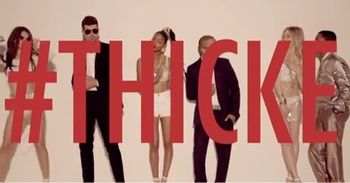 With the rise of Friending Networks, corporations adapted their Advertising Campaigns to better reflect their viewers/consumers. One of the bigger changes was courting the youth demographic up to 25 years old by using their own New Media habits to make them promote the show/product themselves. This also has an added benefit by letting corporations rally the Viral Marketing for a product under one specific hashtag. Different consumers could otherwise create their own hashtag individually, resulting in an awkward "hashtag battle". It can simply be the title (#TvTropesTheShow), only the initials to shorten it (#TTTS) or sometimes the Tagline, a Catchphrase (#lampshaded) or even something completely new created only for this purpose (#ShareTheTrope). Another more ingenious, and insidious, method consists of including a "#" (pronounce "number sign") inside the very title, immediately turning the work into a trendy word. Since hashtags' capitalization in not important, it could either be ALL CAPS to better stand out, all lowercase because millennials "don't have the time for that", or use CamelCase to remain readable while looking somewhat futuristic.

This is mainly used in Live-Action TV as a way to directly interact with their audience by displaying it in one corner at all times. Some chosen tweets can be displayed onscreen during the show at the bottom of the screen to show how the general audience react and incite the rest of the public to react as well and hopefully be featured live on television. Some shows push the concept further by creating episode-specific hashtags to hype up their next episode (#TheBigFinale, #AliceVsBob, …) or even further by creating hashtags to react to key moments while they are still happening (#RedTeamWins, #FarewellAlice, …). Of course, reruns featuring them immediately look dated and the hashtags useless. Another trend appeared late 2015, with corporation making brand deals with Twitter themselves to make specific hashtags (momentarily) appear with special emojis related to the film/product.

The line between an Engineered Hashtag and a good ol' regular hashtag is thin but clear: the latter is created by the users who want to share their experiences while the former is created for the users by the creators themselves to encourage them to talk about their product. It is not impossible for a creator to eventually exploit a popular hashtag created by the users to communicate about the product, effectively turning it into an Ascended Meme. Similarly, an In-Universe hashtag could also be used by the fans and/or the creators to talk about the show, defictionalizing it. Badly conducted campaigns could create Forced Memes by pushing a particular hashtag too much (though one could argue that there is No Such Thing as Bad Publicity). However, if it is successful enough to the point that the hashtag is known outside of its original demographic it can even bring out people eager to Watch It for the Meme. Note that it is not only reserved to multinational corporations selling truckloads of products or a network promoting their new show. A single person, from a football fan supporting his team with #LetsGoWildcats to a protester with #EnoughOfThis on a placard, could do it as well. As long as they publicly show their hashtag to the world with the hope that it will become a thing, the media covering the events could easily offer them free publicity.

For the detractors of this practice, it is viewed as a sneaky way to sell their products to easily manipulable kids and teens, because New Media Are Evil and Popular Is Dumb (in other words, Totally Radical for The New '10s). On the other side, many people find this an easy way to see what other people think about their favorite subject (which is basically the entire purpose of an hashtag to begin with). Old brands can use this to either make themselves look "hip" once again. Remember: Tropes Are Not Bad. For example, old brands could actually make themselves hip again through a well executed hashtag campaign, an independent artist could use an hilarious and charming pun-based hashtag to help promote the Kickstarter for their lifelong dream project or a major company may genuinely be looking for feedback in the hashtag of their disappointing but yet-not-that-hopeless TV show in order to improve things in the next season.

Sub-Trope of Viral Marketing. Compare #HashtagForLaughs which is a comedic use of hashtags (which can overlap with this trope if it is savvy enough) and Audience Participation (Failure when it turns into a Forced Meme). Has nothing to do with The Engineer nor Hashtag Rap, though the punchline could potentially be turned into a viral hashtag.