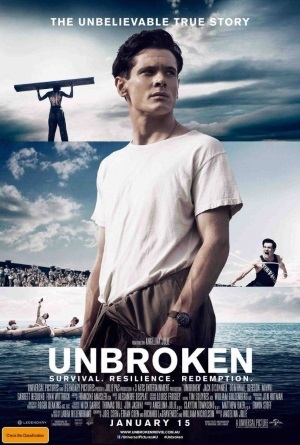 Unbroken is a 2014 film released by Universal and produced by Legendary Pictures that tells the story of Olympic athlete Louie Zamperini's (Jack O'Connell) Real Life account in the World War II where he was stranded in the Pacific Ocean for 47 days along with survivor Russell Phillips (Domhnall Gleeson) and was consequently captured and sent to two Japanese Prisoner of War camps under the brutal and interested watch of Corporal Mutsushiro Watanabe (Miyavi) — nicknamed "The Bird" — until the end of the war in 1945.

This film marks the second feature directed by actress Angelina Jolie, who had a very professional creative team behind: the Coen Brothers writing the script, Roger Deakins doing the cinematography, Alexandre Desplat composing, Coldplay for an Award-Bait Song and special effects by Industrial Light & Magic. Deakins was nominated for the twelfth time — and didn't win again — with other 2 nominations for the film, Best Sound Editing and Best Sound Mixing, in the 2015 Academy Awards.

A sequel called Unbroken: Path to Redemption, about events only alluded to in the end of the film and covered in the book by Hillenbrand, was released at the end of 2018, distributed theatrically by Pure Flix.