So Okay, It's Average 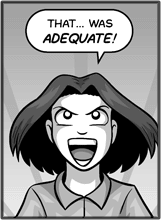 This is about works that, for the most part, never cross the line to bad or good. They just stay roughly in the middle, in the opinion of the viewer — they don't remember anything particularly bad about it, but then they don't remember anything particularly good, either. In fact, they'll probably stop thinking about it at all within a week or so. These are the works we often refer to as "decent", "passable", "okay", "meh", and "mediocre".

Now this doesn't seem important, but some works can still do well even when the audience thinks this about a work. It's a form of comfort food, and often easier to pull off than trying to get the audience to think a work is awesome (which has a higher risk of being horrible if done wrong).

Why do viewers feel this way? Well it depends. Usually it's a Strictly Formula work that is competent, but little else. Often it's a work that is technically and artistically competent, but otherwise uninspired (this can also apply to works that have high production values, but just don't add up to a satisfying whole package). Once in a while, it's a generally good work that strives for greatness, but the result or idea is ultimately too weak to get all the way there.

Reactions can vary, depending on expectations. Those expecting something great can often feel just as cheated as if the work was outright bad — a very common symptom of Hype Backlash. Many believe that playing it safe is worse than trying and failing, as at least something terrible leaves an impact. This is largely the reason for the Four Point Scale. On the other hand, if you aren't expecting much, it's a nice way to kill time, and that's all you are looking for. On yet another hand there's what Joe Queenan described as Scheissbedauer ("shit regret") which is when you were hoping for something that would monumentally SUCK, but it just turns out...meh. When a work is popular because it's so remarkably bad and the makers (or remakers) respond with some improvements, it risks falling down here - fans or anti-fans respond "it used to be So Bad, It Was Better" because the hilariously bad elements have been removed, and the new elements are merely okay.

Works generally considered to be average can still have large Fandoms and Hatedoms, but don't expect the works to be outright polarizing or have Fan Dumbs or Hate Dumbs. The fandoms tend to be about as subdued and pedestrian as the work itself, possibly because no one sees much point in getting worked up over something that doesn't particularly stand out. Interestingly enough, looking at many sites that allow users to rank taste, it's far more common to see things ranked in the middle than at either end.

In truth however, averageness isn't actually negative, nor is it painful. If someone complains that something is "painfully average"note Example: https://www.youtube.com/watch?v=u7pqj6Oy6bs

it can be taken as a compliment to the series or genre in general, since it means they have high expectations for it. So that means, dear reader, that it's okay for you to like a work deemed to fall in this category. If something about the subject matter, execution, cast, or anything else appeals to you, don't let the fact that the aggregate score falls below an 8(0%) stop you from enjoying it.

Compare Capcom Sequel Stagnation (which often leads to this).

Contrast So Cool, It's Awesome, So Bad, It's Good, Cult Classic, So Bad, It's Horrible, and So Unfunny, It's Funny. Works that fit into those would not fit here.

No examples, please. This is mostly a personal reaction and putting anything would eventually overload the page.

Alternative Title(s): So OK Its Average, So Average Its Okay