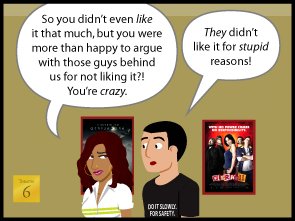 "Let's just say there's one segment of the population that loves [Tween Pop] songs, one segment that hates them and a really big segment (people on the Internet who want other Internet people to think they're cool) that feel obligated to say they hate them"
— Christina H, 6 Monopolies You Didn't Know Run the World

A fandom can sometimes reach rather illogical levels. But let's face it, hating a thing can bring out the jerkass in someone as much as liking it, especially on the Internet. Actions that drop someone's IQ points to dangerously low levels can be inspired by hate as easily as by love.

Hate Dumb is the polar opposite of fan dumb. It always exists — where there is fan dumb, there is hate dumb.

The bottom line is this: it's okay to dislike a show/movie/game/book/character/whatever. But there are civil and socially acceptable ways of expressing that dislike, just like with expressing love for a character or medium. It's going too far in disliking something where that dislike of a work becomes hate dumb.

Of course, much like fan dumb, hate dumb are usually just a vocal minority of people who don't like something. Sometimes it's not even considered part of the hatedom. Most of them, including yourself (unless you actually do fit this, and you won't know if you do) are pretty respectful when it comes to critiquing a work, or will simply just ignore it as they fully know that they won't enjoy the work and let the fans be.

As a footnote, to many a devoted fan, nearly every hatedom for their fandom is a hate dumb. There is often a broad overlap between people who accuse others of being in a hate dumb and people who enjoy Complaining About People Not Liking the Show. Similarly, to many a devoted hater, nearly every fandom for their hatedom is fan dumb. This goes to show the polar opposites of it.

The concept is closely related to Don't Shoot the Message.

Not to be confused with hatedom, which is the intelligent version of this. Well... the less stupid version, anyway.

Please do not put this on a work's page including its sub-pages. The only exception is if it is enforced canonically as someone's character trait. In that case, mark it as such.