Not So Above It All 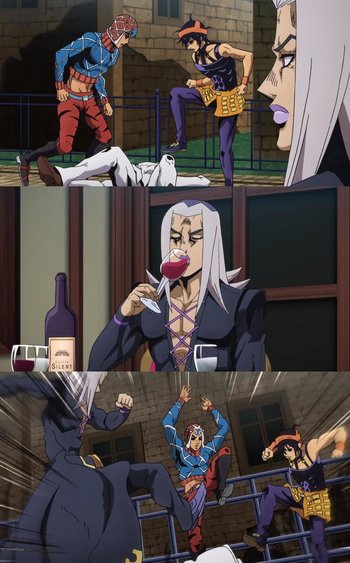 You gotta get your kicks somehow.
Flash: So yeah, I did go behind your back! I'd do it again! What do you say to that, big guy?
Martian Manhunter: [smiles] I was only going to ask if you wanted to play Brawlin' Bots.
Flash: Dibs on the green one! [dashes off]
Martian Manhunter: [mumbles] I wanted the green one...
— Justice League, "The Ties That Bind"
Advertisement:

The Straight Man takes a fall. His usual position is far above the prevailing attitude of his crew, wackiness, pettiness or just general slacker-itis.

In a story where the wackiness level is really high, the straight man is still goofier and wackier than anyone you know, but he has his standards to maintain. Under no circumstances will he allow himself to be pulled down into the general chaos of those around him.

Until he does. You can only fight the tide for so long. As the age-old adage goes: "a chain is only as strong as its weakest link." If you can't beat 'em, join 'em.

Compare with Not So Stoic. May be implemented with an ...Or So I Heard. If he somehow brings it on himself, it might overlap with Break the Haughty, but not necessarily so. See also Hypocritical Humor, where often the Straight Man in question had just told someone off for doing something goofy and is now doing it themselves.

See also Only Sane by Comparison, where the character is more openly "wacky", yet still manages to be the one who holds everything together.

Sometimes related to an Idiot Ball moment. Contrast Smart Ball, when their dimmer co-star may have a moment of clarity or tact.

There is No Ghost!

There is No Ghost!