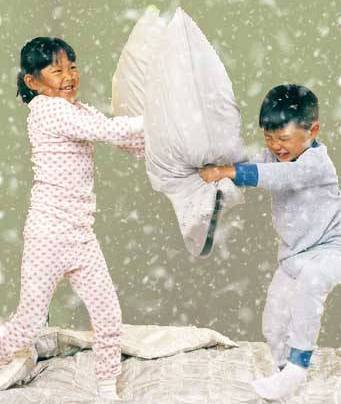 Pillow fights are often used to display and highlight innocence, immaturity, and child mischief. Pillow fights usually happen at a kid's Slumber Party, and other such events where kids have to stay the night with each other.

They almost always start where one character chucks a pillow at a more serious character out of boredom or just to provoke them, the second chucks it back and like a Food Fight, and it snowballs from there. When adults get into pillow fights, it's usually either to show that they are immature, or still kids at heart. In works that don't take themselves too seriously, pillow fights play out like fight scenes, cause exaggerated amounts of damage, and might even cause injuries.

Pillow fight also tend to cause a big mess with feathers littering the room. Parents will often have to come up to the room to see what all the noise is about.

Childish pillow fights are a staple in Kid Coms and in shows aimed primarily at girls.

Similar to the Sailor Moon example, the Cures get into a pillow fight during a school field trip.

Similar to the Sailor Moon example, the Cures get into a pillow fight during a school field trip.