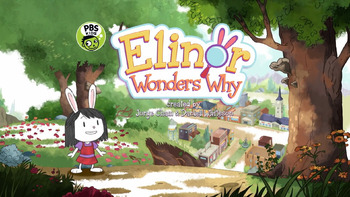 Ask a question! What will you find?
Just listen and see;
Come and wonder with me.
— Elinor, from the theme song
Advertisement:

It is about a young rabbit-girl named Elinor who has a lot of questions about the world around her. It has been picked up

for 37 episodes, as well as a special, and began airing on Labor Day 2020. However, PBS Kids also advance-released the premiere episode

of the series, "Ms. Mole's Glasses / Elinor Stops the Squish" to YouTube, as well as to its online video / app service in July 2020. It has also released a number of other episodes of the series freely to YouTube since the show's premiere. In 2021, PBS Kids also began releasing a series of shorts under the title Elinor Wonders Why - That's So Interesting!

The series is animated by Pipeline Studios, and produced by Shoe Ink. As of now, the series is Shoe Ink's first and only production.

This is probably Elinor's first time using binoculars and things got curious from here...

This is probably Elinor's first time using binoculars and things got curious from here...