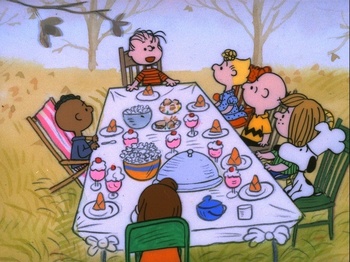 Charlie Brown: We've got another holiday to worry about. It seems Thanksgiving Day is upon us.
Sally: I haven't even finished eating all of my Halloween candy!
Advertisement:

The tenth of the Peanuts animated specials, and naturally enough a Thanksgiving Episode, it first aired on CBS on November 20, 1973note though, in a case of Short Run in Peru, it actually premiered in Canada on the CBC on October 6, 1973, during the Canadian Thanksgiving holiday weekend and became an annual tradition thereafter. Much as Thanksgiving itself is sandwiched in between the higher-profile holidays of Halloween and Christmas, this special never became quite as iconic as the similarly holiday-themed A Charlie Brown Christmas and It's the Great Pumpkin, Charlie Brown, though like those it continues to air each and every year.

The plot concerns Peppermint Patty inviting herself, Marcie, and Franklin over to Charlie Brown's house for Thanksgiving dinner. Unfortunately, Charlie Brown is going to his grandmother's house for dinner and he can't seem to explain this fact to Peppermint Patty, so—with help from Linus, Snoopy, and Woodstock—he scrambles to throw together a makeshift backyard "dinner" consisting of toast, popcorn, pretzel sticks, and jelly beans.

In 2001, annual broadcast rights to the special moved to ABC, where it was typically paired with an edited version of "The Mayflower Voyagers," the premiere episode of the 1988–89 mini-series This Is America, Charlie Brown (the two specials are commonly paired on DVD as well.) In 2020, this and the other Peanuts specials moved to Apple TV+ as part of a streaming deal. However, it aired on

PBS and PBS Kids that year as part of a last-minute arrangement, which has carried on into at least 2021.

Followed by It's a Mystery, Charlie Brown in 1974.