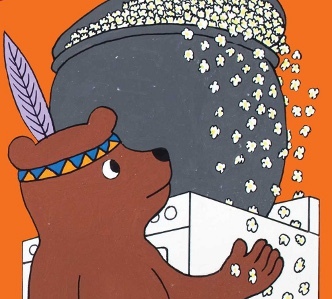 Mmmmmmm... popcorn. It's delicious, it's buttery and salty (or another flavor, if you wish) and it's fun to see and hear it pop as you prepare it.

But be careful! Don't leave it unattended, make sure the cover is on whatever you're using to pop with, and don't use too many kernels. Failure to do so would leave you with a huge, popcorn-y mess.

Writers like to take popcorn popping to the extreme since, Truth in Television, popcorn does expand once it's popped. And hey, it doesn't even matter what kind of corn is getting heated up (or the condition of the corn or even if it's still on the cob); it's going to pop either way.

Expect a a big explosion if the popcorn is contained inside something as it's popping. Compare Impossible Leavening which is also about food going all over the place; and Pass the Popcorn, where a character is seen eating popcorn as they watch something happen. May even overlap if the popcorn they're eating is part of the mess.