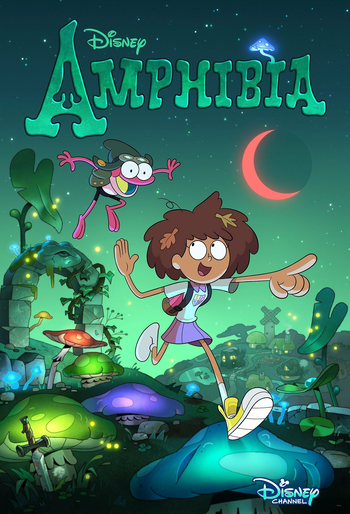 Welcome to Amphibia, life don't get much crazier!
"Look, if a friend likes a pencil case, you get it for them. If your friend likes your new shoes, you give them to her! And if a friend wants you to steal a crazy music box from a thrift store, even if you really don't want to... you do it, okay? Because if you don't... they might not want to be your friend anymore."
— Anne Boonchuy
Advertisement:

Amphibia is a Disney Channel animated adventure/comedy series created by Matt Braly, who previously served as a director on Gravity Falls.

The show chronicles the adventures of Anne Boonchuy (Brenda Song), a Thai-American teenager who, after stealing a mysterious music box at the behest of her Childhood Friends, Sasha Waybright (Anna Akana) and Marcy Wu (Haley Tju), is magically transported to the eponymous world of Amphibia, a mystical marshland populated by Frog Men.

Following some confusion with the local populace, she is taken in by an excitable young frog named Sprig Plantar (Justin Felbinger), his grandfather Hopediah "Hop Pop" (Bill Farmer) and his little sister Polly (Amanda Leighton), who promise to watch over this strange "human" monster. With Sprig's help, Anne discovers the first true friendship of her life, learns to be a hero, and slowly figures out how to return to Earth. Unbeknownst to Anne, however, her old friends have also made the trip to this amphibian realm, and have been forced to adapt in their own ways, for better and for worse.

Eventually, Anne manages to reunite with her human friends, and learns more about the true nature of the music box with the aid of the ruler of Amphibia, King Andrias (Keith David). However, as everyone works to recharge the box and help the girls finally return to Earth, they discover that the box might be the key to something much greater, and that they're now at the center of an ancient prophecy that promises to affect more than just Amphibia.

The series premiered on June 17, 2019, with the first two episodes being made available on various online services a few days prior. The second season premiered on July 11, 2020, whilst the third premiered on October 2, 2021, with Braly confirming in interviews that it would be the show's final season. The half-hour series finale, entitled "The Hardest Thing", aired on May 14, 2022.

It officially has a Friendly Fandom with The Owl House, which the creators of both series have acknowledged and actively encouraged.

Tropes A to M
Tropes N to Z
Feedback