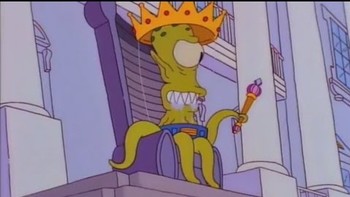 As soon as Kang was elected President of the United States, he made some changes.
Atvar summed up the Race’s view of the United States in one scornful word: “Snoutcounters! How do they have the hubris to imagine they can build a land that amounts to anything by counting one another’s snouts?”
— Worldwar: In the Balance
Advertisement:

A Sub-Trope of Humans Are Special, in some works of fiction it seems that Humanity is the only civilization in the Universe that ever thought it was a good idea to choose leaders by voting.

Sometimes this is done because the writer wants to make the aliens truly alien in culture, thus having weird, even sometimes incomprehensible, political systems is a way. Due to Hollywood and We All Live in America, an absolute monarchy or dictatorship is foreign to most western pop culture, while not having to come up with truly non-human systems since Most Writers Are Human. In some works it could be a way to present humanity's nice democratic system vs the aliens' evil Empire, which is very common when The Federation faces The Empire. (This is especially common in works made during the Cold War for obvious reasons.) Sometimes is just a matter of Planet of Hats: some writers just can't think that a Proud Warrior Race can be democratic (despite the fact that we have many examples in our own world) because, well warriors are not democrats, also in scenarios of Alien Invasion, having the invaders enjoying a democracy would feel kind of contradictory (despite, again, many examples in our history where democratic republics held vast, cruel empires and subjugated other peoples without considering this a contradiction).

Contrast with Aliens Never Invented the Wheel for the technical counterpart. See also Feudal Future for when the humans don't have democracy any more either. Often overlaps with One-Federation Limit, with humans as the one democratic government.