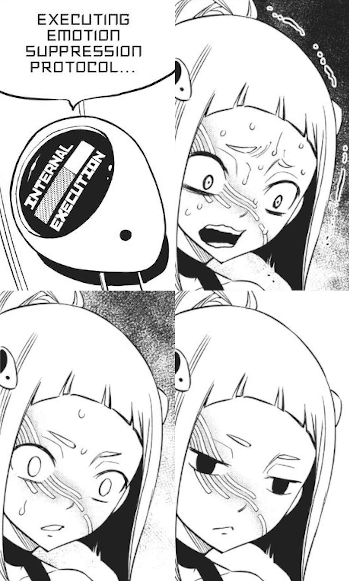 "Well, that's it, then — you had a controlling mother who had certain expectations, and if you strayed from them, you were shut down. That's why you're afraid to care about anything — and why you can't express yourself."
— Azula, summing up her friend Mai on Avatar: The Last Airbender
Advertisement:

Human emotions can be quite an obstacle. Fear can make you unable to face the danger. Compassion can prevent you from shooting the dog even if it's necessary. Love can make you crazy, dumb or lead you straight to the Dark Side. Let alone it hurts. And then there are such things as anger or hatred. Anyway, emotions cloud your mind and impede logical thought.

So, what do you do with them? Well, in the world of fiction you can find a way to relieve yourself of this burden. Via some sort of training or some Applied Phlebotinum you can completely remove your capacity to feel emotions. Results and consequences depend on the author and how exactly the emotions are suppressed.

Portrayed as a good thing, Emotion Suppression can be used to enter Heroic Safe Mode, to escape Mind Rape or simply to concentrate on the fight clearing your head of unimportant thoughts. The Smart Guy may enter a state of pure impartial logic to perform Awesomeness by Analysis, and the master of Politeness Judo can calmly suggest to the ambassador that it would be wise for his kingdom to withdraw their invading troops before the Fantasic Nukes are launched without dropping her polite and reserved facade for an instant. More combat or magically oriented characters likewise can benefit from a Meditation Powerup. This kind of suppression is almost always temporary and voluntary.

Sometimes it is portrayed as a bad thing. In that case the character in question can at best hope to be an a loner or an Emotionless Girl not knowing This Thing You Call Love. Alternately, when a character has been emotionally hurt previously, or seen someone close to them be hurt, they may decide to seek Safety in Indifference, and often need time before they feel comfortable letting down their guard again. At worst, the character will be put in a sort of Uncanny Valley, being human in appearance but not human in behaviour — arguably the worst form being the Stepford Smiler. Any sort of permanent Emotion Suppression will probably turn out this way, especially if it is not voluntary.

On the neutral side, Emotion Suppression is often portrayed as a form of Power at a Price: a character's Superpowered Evil Side may demonstrate Tranquil Fury or take the pragmatic approach to solving problems, or The Empath may have to practice Emotion Suppression to prevent Power Incontinence. Occasionally a hero must also remember that Good Is Not Soft or Nice, and that they may be occasionally called upon to set aside their personal feelings for the greater good when solving a Cold Equation.

This trope can also be carried out on a massive scale. There can be a human or alien culture where every representative has their emotions suppressed. This situation also has little chance of being undeniably good. At best, (other) humans will just leave it as it is, perhaps after some demonstrations of how emotions can be useful. If it's done by an Evil Overlord or... uh... a caring and benevolent ruler who is unable to paint smilies on their subjects' souls but at least wants to remove tears from there, you've got a ready dystopian setting.

This is part of the basis of The Stoic and the Emotionless Girl, Ice Queen and The Quiet One characters, The Baroness, the Deadpan Snarker (and Little Miss Snarker), the Broken Bird, the Sugar-and-Ice Personality and the Aloof Big Brother. Compare and contrast Getting Smilies Painted on Your Soul or Lotus-Eater Machine: Emotion Suppression does not make you happy, it just makes you not-sad, not-angry, you know, emotionless.

The people of Mondas, now known as Cybermen, converted themselves into cyborgs in order to survive on their dying planet. In the process, they removed their capacity for and understanding of emotions, which deeply unnerves both the Doctor and Polly.

Example of:
Cybernetics Eat Your Soul

The people of Mondas, now known as Cybermen, converted themselves into cyborgs in order to survive on their dying planet. In the process, they removed their capacity for and understanding of emotions, which deeply unnerves both the Doctor and Polly.