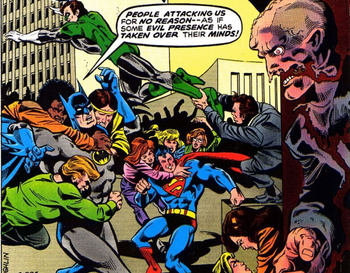 Galvatron: The Autobots are acting like madmen!
Rodimus Prime: It's a madness plague, Galvatron. If one of those Transformers touches you, you're infected.
Galvatron: You're lying!
Rodimus Prime: Fine. Whatever makes you a happy Decepticon. Just watch your rear thruster.
— The Transformers, "The Return Of Optimus Prime: Part One".
Advertisement:

A plot wherein the characters are affected by a force unknown to them and become increasingly snappish and disagreeable to each other, sometimes escalating to outright murderousness. This is often a subtle plan by the Big Bad of the story who figures that it's easier to just let the heroes kill each other off. Naturally, the heroes realize it just in time. This is sometimes a way for characters to vent hitherto unmentioned grievances. Ironically, despite the use of Applied Phlebotinum, this is a more believable version of Toilet Seat Divorce and Jerkass Ball, since everyone is Not Himself.

In video games with Status Effects, this can show up as an actual game mechanic, usually called "Confusion" or "Berserk."

The Trope Namer is the plot of The Transformers cartoon storyline "The Return of Optimus Prime", a red glowy virus transmitted by touch that affects human and robot alike.

Subtrope of Emotion Bomb. Contrast with Love Is in the Air. Compare Apple of Discord. See also Mind Virus and Artifact of Attraction. Frequently overlaps with Technically Living Zombie.

Those turned into Impossible Ideology Monsters are turned into warped, uber-extreme caricatures of themselves, Pan-Africanism turned into an ideology that desires the total annihilation of all other parts of the world except for Africa.

Those turned into Impossible Ideology Monsters are turned into warped, uber-extreme caricatures of themselves, Pan-Africanism turned into an ideology that desires the total annihilation of all other parts of the world except for Africa.