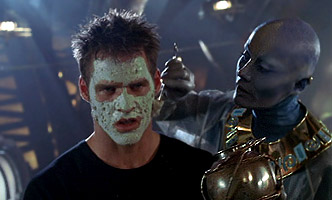 The Moyans are desperate people, and sometimes they do stupid things. Like bringing aboard a dude named T’raltixx to adjust Moya's electrical systems in order to somehow make her untraceable, even from Scorpius (who has been busy scattering "Wanted" beacons everywhere in the universe). Aeryn and Chiana are fresh from the market where all they've managed to buy are "dried food rectangles" — a thousand units of crackers. Aeryn is working at hacking into a wanted beacon she found down on the commerce planet, courtesy of Scorpius - hence the decision to hastily buy crackers and high tail it out of there before somebody recognized them. T'raltixx announces he's ready to show off his cloaking device using Crichton's module, but Crichton doesn't trust him. His protests are overruled when we see the device turn half of the module invisible.
Advertisement:

T'raltixx convinces them that to build the device large enough for Moya, they need to head back to his home planet. The bulk of the journey will be spent in the light of five pulsars, which he says might affect them in strange ways, but implores them not to worry about it. "It's rare that it would disturb beings of your sentient stature." Reverse psychology, much? They wait a couple seconds after entering the light, and of course Zhaan starts in on her photogasms (accompanied by some great eye-rolling on Crichton and D'Argo's part), but nothing seems to happen. They go about their business for awhile, Crichton showing T'raltixx around the ship, but we start to notice crabby behavior on the part of the crew. Aside from this, nothing seems to be really out of the ordinary, that is, until D'Argo catches Rygel swiping food and starts violently shoving crackers into his mouth. It all starts to spiral from there. Crichton seems to be the only one who is aware that something is off, but at the same time is very condescending to Pilot, calling him "Shellhead," Pilot having just moments earlier admitted to T'raltixx that he didn't particularly like any of the others.

The situation begins to deteriorate rapidly as everyone becomes increasingly paranoid: Aeryn has taken to wandering the ship with a gun; Rygel is hiding in the walls; Chiana and D'Argo are convinced that Aeryn is working for Scorpius as some sort of double agent; Pilot is channeling HAL... and Zhaan, well, she's just having a grand ole time. While everyone else is forging alliances and playing Survivor in Space, Crichton can't understand why the pulsars have affected Pilot as well; no light can breach the den. But before Crichton can make any headway on this case, he's sucked back into the madness. Soon he's singing about ice cream. But even in his crazy state, he's still trying to get people to put down their weapons; then Chiana knees him in the nuts, and Crichton starts hallucinating that the wanted beacon is talking to him. Then the hologram of Scorpius materializes into flesh. Oh dear. Meanwhile, T'raltixx keeps screaming that he needs MOAR LIGHT. Pilot, unable to resist the idea of life without the crew, obeys.

In the hangar bay, Crichton confronts D'Argo at the point of a gun, and even though his intent is to get D'Argo to put down his weapon and stop acting crazy. Crichton looks pretty crazy himself, especially when he starts talking to an invisible Scorpius, who has suggested that they kill everyone so they can go to the beach. Fresh from shooting D'Argo in the leg (D'Argo slips away, thanks to Scorpy), Crichton corners Chiana in the hallway and pretty much molests her at gunpoint. Aeryn knocks Rygel out just in time for Crichton appear, and they say some nasty things to one another. Of course this is when Scorpy shows up, this time wearing a luau shirt and inviting Crichton out for pizza. Crichton responds by blowing his head off, which somehow snaps him back to sanity. He tries to talk down Aeryn as well, but it isn't happening, so he knocks her unconscious and ties her up.

Later, Crichton's got everyone tied to the table in the kitchen so he can knock some sense into them about this whole T'raltixx business. T'raltixx screams for MOAR LIGHT, and when Pilot complies, Moya starts to glow on both the inside and the outside. Seeing the corridor walls emitting light, the others come around to Crichton's plan, and start making preparations. Since John is the least affected, he'll be the one to kill T'raltixx. The others aren't happy about this until Chiana points out that the reason Crichton is the least affected is because he's "deficient": He's got the worst eyesight out of all of them. So, they dress him up in protective gear, including a paste made from Zhaan's bile, so that he can kill T'raltixx and not go blind or burn up in the process. Pretty soon he's sneaking into T'raltixx’s chamber all invisible with D'Argo’s Qualta blade, chopping wires and deflecting T'raltixx's laser beams with his makeshift shield. Pretty soon the little bugger starts skittering up the walls in a futile attempt to escape, only for Crichton to shoot him down: T’raltixx is all wah, wah there are THOUSANDS JUST LIKE ME! Stab. No more light.

Later, Pilot apologizes to D'Argo and Rygel for his behavior. D'Argo tells Rygel that he is ashamed of what he did to him and asks for forgiveness, but Rygel says he can't forgive him, not yet... and he's not the only one: everyone is ashamed of the way T'raltixx brought out the worst in them. Crichton glumly sings "Humpty Dumpty" to himself and then asks Zhaan, "How do we take it all back?" "I don’t know," she says.

Don't worry, John, you'll put it back together again.

With Crichton the only member of the crew weak enough to stop T'raltixx, the others hastily load him up with all the defences they can give him - all of them clearly very downcast about the situation, including Crichton himself. Aeryn's final remark says it all.

With Crichton the only member of the crew weak enough to stop T'raltixx, the others hastily load him up with all the defences they can give him - all of them clearly very downcast about the situation, including Crichton himself. Aeryn's final remark says it all.