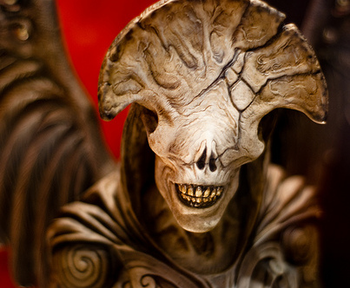 At least he doesn't have to worry about trips to the optometrist...
"They rise in green robes roaring from the green hells of the sea
Where fallen skies and evil hues and eyeless creatures be."
— G. K. Chesterton, Lepanto
Advertisement:

Imagine you're drawing a face. You draw an oval, perhaps a jutting chin, some ruffled hair. Give them ears and a nose and a nice big smile. And then stop.

What does it look like? Well, not human, that's for sure. Without eyes (even just the sockets), our faces are unrecognizable and unreal. Without eyes, how can we see? More importantly, in many cultures (at any rate in Western culture) eye contact is a means to connect with others on an emotional level. It is said that eyes are Windows of the Soul, so intuitively it is impossible to connect with something/someone that has no eyes.

Creatures without eyes can be downright creepy, let's face it. Seeing a Faceless Eye chasing you is scary, sure, but seeing an eyeless face is usually more scary, since it looks so close to human but there's something not quite human about it. In addition, eyes are a massive weak point if you're looking to attack or injure something. When you're dealing with a hostile creature that lacks eyes, they don't have that weak point.

Compare with Hidden Eyes, which is a temporary, metaphorical implementation of this. Contrast Extra Eyes, where the character in question has too many eyes. Related to The Blank. And if something doesn't have eyes on their face, they may have them somewhere else. Not to be confused with Youngblood's disease. May be justified as a result of Eye Scream, or (in the case of creatures such as The Morlocks) if Bizarre Alien Senses are used in place of vision. Compare Ghostly Gape.