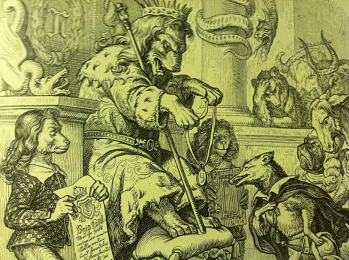 "Aesop, or Babrius (or whatever his name was), understood that, for a fable, all the persons must be impersonal. They must be like abstractions in algebra, or like pieces in chess. The lion must always be stronger than the wolf, just as four is always double of two. The fox in a fable must move crooked, as the knight in chess must move crooked. The sheep in a fable must march on, as the pawn in chess must march on. . .
This is the immortal justification of the Fable: that we could not teach the plainest truths so simply without turning men into chessmen. We cannot talk of such simple things without using animals that do not talk at all. Suppose, for a moment, that you turn the wolf into a wolfish baron, or the fox into a foxy diplomatist. You will at once remember that even barons are human, you will be unable to forget that even diplomatists are men."
— G. K. Chesterton
Advertisement:

If an author wants to make an Allegory about human society, there's no better way than replacing people with an animal stereotype. An entire class of people will be replaced by a type of animal, and different animals will reflect the different social classes of a human society.

So, if a writer wants to criticize conformity, she will create a society of anthropomorphic ants like in Antz. Or, perhaps the author wants to criticize society for not working hard enough, like in A Bug's Life, so she adds in locusts that never work and only loot the hard work of others.

Aesop himself was famous for these. It is particularly common in children's stories in an attempt to make moralistic messages much more entertaining and understandable for the little tykes.

Beast Fables feature a range between Intellectual Animals and Funny Animals. These are Older Than Dirt (going back to Mesopotamia and Ancient Egypt), which means, in the oldest stories, it's hard to tell if the original teller saw actual animals as equal to people, or saw them as humanoid versions of animals; a character may behave as a human one minute and a talking animal the next.