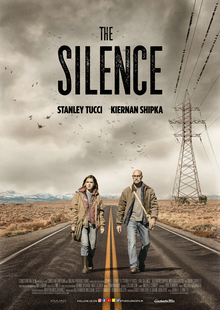 The Silence is a 2019 Netflix original horror movie adapted from a 2015 novel of the same name by Tim Lebbon. Its premise is that a spelunking expedition in Pennsylvania accidentally releases a tremendous swarm of monsters resembling eyeless crosses between bats and pterosaurs, later named vesps, that hunt exclusively by sound, which swiftly overrun a large portion of the North American continent.

The movie itself follows the deaf 16-year-old Ally Andrews and her family — her father Hugh, her mother Kelly, her younger brother Jude, her grandmother Lynn and her father's childhood friend Glenn — who are forced to flee from their home in search of safety while avoiding both vesp swarms and ill-intentioned humans.

Not to be confused with the 1963 Swedish movie Tystnaden, translated in English as The Silence, or for the 2016 Martin Scorsese film Silence.