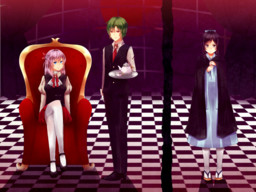 Whose eyes do you trust?
"You have the power to split the world into half. You can destroy buildings, overturn mountains...
But you are still powerless against a human.
Even a human who wants to kill you."
Advertisement:

Mica: Apoptosis is an RPG-style Horror game by Soyasushi Productions detailing the experiences of three Unreliable Narrators who are vastly different from one another, yet whose experiences will bring you closer and closer to the core of the story.

One is Princess Micaiah, a pretty young girl who lives with her servants in a castle disconnected from the horrifying outside world, sheltered from her past which comes back to haunt her. Then there's her right-hand man Lenine, a young man quiet about his past. And finally, there is Mika, a broken girl with psychic powers who escapes her confinement one day, only to run into a strange-looking castle for solace...

And in the middle of it all is a conspiracy regarding a Corrupt Church, a growing fear of psychics, and a mysterious child who claims to be The Messiah... by killing everything that stands in His way.

A full demo can be downloaded on the Official Site

On December 18, 2017 the game's creator announced that they had lost

ALL the work that had been done on the series so far due to a catastrophic hardware failure, including almost complete versions of chapters 4 and 5, which have never been released. The game was never cancelled outright, but that unfortunate incident, combined with the author's silence on all of their projects since 2018, does not bode well for Mica's future.