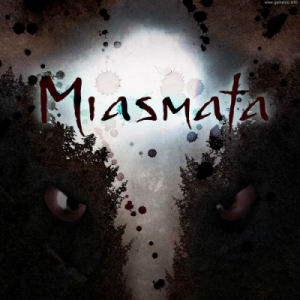 Miasmata is a 2012 first-person adventure/exploration/Survival Horror game, notable for being one of the first full releases from the Steam Greenlight service.

The player takes the role of Robert Hughes, an exiled scientist infected with a mysterious plague. Searching for a cure, Robert travels to a secluded island that is home to a commune of talented naturalist scientists. Upon his arrival, Robert finds the island completely abandoned, and must use the island's abandoned facilities to study the local plantlife and develop a cure for the plague before it claims his life. However, Robert is not alone; something else is alive on the island, stalking him across its vast terrain, and Robert must learn to adapt and evade his foe if he is to survive long enough to develop the cure.

The game takes place from a first-person perspective, with the player exploring a vast island. Players must survive day by day... finding water to stave off thirst, dealing with fever and other sickness, getting enough sleep, etc. The local plantlife can be researched and used to concoct a variety of helpful tonics and medicines. The game also uses a unique cartography system where the player uses nearby landmarks to triangulate his position, expanding the area shown on his map as well as revealing his position on it.

Tropes present in Miasmata include: