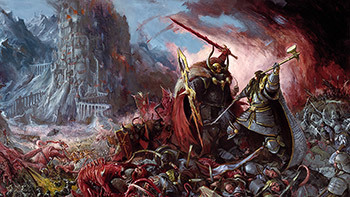 The old ones speak of winter, the young ones praise the sun.
"I can't remember the last time I saw a wizard casting magic with a fucking smile on his face. It's always a grim, half-hooded scowl of disgust, like he's shaking off some stubborn ear-wax rather than the manifested power of the Fire Spirits. 'Ooh, I had to fight in a big war because I've got mastery of time and space; meh meh meh'. Why don't you magic yourself cheerful, you gloomy spod?"
— Zero Punctuation on Two Worlds II

Dark Fantasy is, generally speaking, a Darker and Edgier subgenre of fantasy. These kind of stories can be pretty much described as Standard Fantasy Setting meets Crapsack World, as opposed to a, usually-lighthearted, regular fantasy setting. Oftentimes common fantasy elements are deconstructed where the Unfortunate Implications presented by some of the elements of standard fantasy become Ascended Fridge Horror in dark fantasy works. So magic is real and it can be used for pretty much any application, huh? A dark fantasy setting will show just how depraved an evil magician, sorcerer, or wizard can be by using magic from Body Horror on poor hapless muggles to straight up Rape using spells of enchantment or mind control. Oh, normal fantasy settings have magical or enchanted animals like unicorns, griffons, and cute little animal familiars that magic users have? Well you can bet that a Dark Fantasy setting will go above and beyond to show that Nature Is Not Nice on steroids with horrific bestiary like Giant Spiders, Giant Squid, and dragons as furious hellbeasts straight from the darkest abyss capable of destroying whole cities if not countries. What's that? Heroes can call upon their patron deities for strength to banish the great evil and restore peace to the land? In a dark fantasy setting you can bet that very few gods are all that nice, nor are they all that interested in mortal affairs, with the few that are usually operating on Blue and Orange Morality while believing A Million Is a Statistic with any boon they give coming at a cost.

Some authors go beyond deconstruction and the story is played in the darkest way possible, and the best you can hope for is Grey and Gray Morality. Wikipedia goes a step farther, saying it's Horror meets Fantasy. It may have been originally, but now, with some linguistic drift, any remarkably dark fantasy story (it's sometimes enough if it's set in a Crapsack World) is often listed as a Dark Fantasy. While it's often a matter of marketing or abuse of terms, this entry assumes the latter, currently more common, definition.

Darker and Edgier Science Fiction isn't recognised as a subgenera in the same way as in Fantasy. Dark Fantasy *reacts to* and *deconstructs* mainline genre fantasy where, in the case of Science Fiction, it has always had a streak of darkness running through it, from Frankenstein (often regarded as the first Science Fiction novel) onwards. In recent years, grimdark has become another name for Dark Fantasy with fans on both sides divided whether it's a valid name for it or not.

Do not confuse with Low Fantasy, which is about downplaying fantastic elements in order to tell a more realistic story. The supernatural levels of a Dark Fantasy can range anywhere from super low to Cosmic Horror high.

Also, if you want to write your own, check this out.

Sibling trope to Dungeon Punk, which can be just as grim and gritty, but Dungeon Punk has Magitek. See also Fantastic Noir. May be the result of a disruption in, or Evil's turn, on the Balance Of Good and Evil.