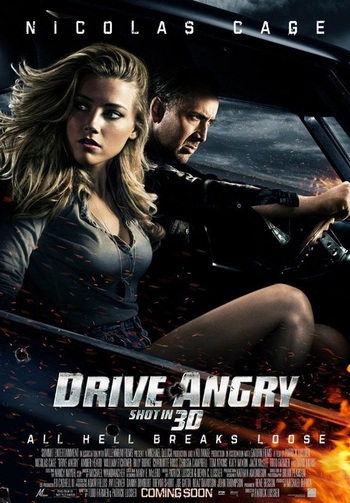 "Since the birth of time, humanity has endeavored to restrain evil men in prisons. But since Cain fled the murder of his brother, evil men have fled the walls of punishment. So, it doesn't matter if you're a badass motherfucker on the run, because you think you're better than everyone else and somehow entitled to do what you gotta do. No. Because, you see, badass motherfuckers are never fast enough. In the end, they will all be accounted for."
— The Accountant, Opening Monologue
Advertisement:

Drive Angry is a 2011 3D action movie from the same people behind My Bloody Valentine 3D. Nicolas Cage plays Milton, a man who has broken out of Hell to prevent the cult that murdered his daughter from sacrificing her kidnapped child to Satan. He is being pursued by the Accountant (William Fichtner), a supernatural operative of Satan who has been sent to bring Milton back to Hell. Along the way, Milton picks up a waitress named Piper (Amber Heard) in his quest to save his granddaughter.

Not to be confused with braking angrily.