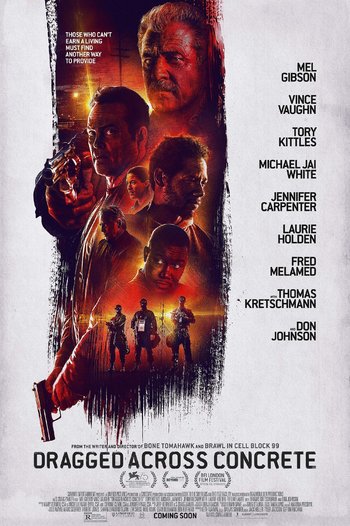 Those who can't earn a living must find another way to provide.
"There's a lot of imbeciles out there."
— Lt. Brett Ridgeman
Advertisement:

Detectives Brett Ridgeman (Gibson) and Tony Lurasetti (Vaughn) are disgraced and put on six weeks unpaid leave after a video of their rough handling of a suspect makes the news. With each man facing his own financial troubles and uncertainty about the future, the two conspire to target and rob a high-level drug dealer identified through their connections in the criminal underworld. Meanwhile Henry Johns (Kittles), a recently-released ex-con, gets roped into a mysterious but lucrative job by his old friend Biscuit (White) in hopes of relieving his own financial straits. These two pairs find themselves on a collision course with each other, a crew of ruthless, sadistic criminals led by the enigmatic Laurence Vogelman (Kretschmann), and the various bystanders caught in the middle.