Right Through His Pants 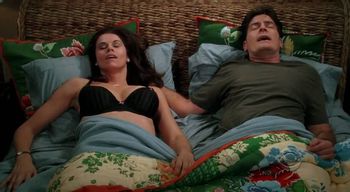 A form of soft-core "figleaf" male censorship, where men are shown wearing pants or underwear, in situations when they normally would be nude.

Fanservice most often is aimed at the straight male Demographic. The assumption is that most heterosexual guys prefer seeing female flesh to seeing other naked guys. Therefore, because Most Writers Are Male, men in sex scenes will be far more covered than women, even during intercourse. The woman may be completely naked (or at least not wearing anything visible. A skintone patch or a cover between legs can be completely hidden from the camera in a way that a penis can't), but the guy will still have his shirt on — or sometimes only his fly is down. It doesn't matter that with his fly down and his belt off the guy's pants would fall down. It also ignores how painful sex with a metal zipper rubbing up against the genitals could be (although this particular problem could presumably be averted by having the man wear pants with a button-up fly instead). All that matters is seeing that sweet, sweet fanservice with the least amount of squick.

This is most obviously shown by the trope where, even after sex — or sometimes even during sex, when it's interrupted — men will be shown wearing boxer shorts; apparently the message is that women also don't want to see a man's naked "area" — even while having sex with them. It's also done for practical reasons. Genitalia in general is too hard-core for anything less than X-rated sex scenes (but are fine for PG-13 otherwise), and it's simply impossible to avoid seeing men's genitals while showing their "area"; meanwhile, women typically wear loose lingerie to avoid showing even pubic hair.

For an analysis of why creators may choose to use this trope, take a look at the Analysis page. (Tab above)

Can be a case of Truth in Television. Couples engaged in public sex may wear as much clothing as possible for varying reasons, and depending on the circumstances (including temperature) it may not always be practical to completely disrobe. Compare Wall Bang Her, which usually carries the implication that He and She were both just too horny to bother taking their clothes off. See also Sex Dressed, when a couple's disheveled clothing makes it obvious that they've been doing the deed. Related to Magic Pants, where a shapeshifter retains some or all of their clothing even when it defies all logic.

This trope may actually be Older Than Feudalism - there are numerous Roman wall paintings depicting couples during sex, with the woman wearing a brassiere. This may have been because it would've been considered lascivious for her to show her breasts to her own husband during sex, or it may have been censorship on the part of the artist.

Not to be confused with something else going through a man's pants.