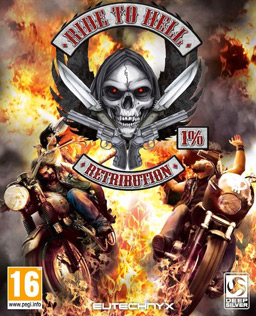 Ride to Hell: Retribution is a 3rd-person action/driving game released in June 2013.

After returning from his tour of duty in Vietnam, Jake Conway reunites with his uncle Mack and younger brother Mikey. After the latter is murdered by members of the biker gang Devil's Hand, Jake vows revenge against them.

It was released for the PlayStation 3 and Xbox 360, and its PC version was distributed through Steam.

This game features examples of the following:

Their goal is to kill Jake anyways, why not just do it now?

Their goal is to kill Jake anyways, why not just do it now?