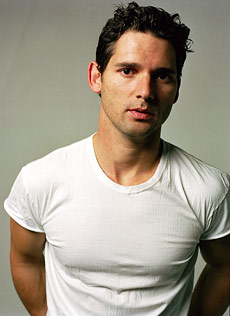 "I'd say I'm the opposite of someone that has the urge to stand in front of strangers and make them laugh, but the idea of getting up and telling a story and people finding it amusing always appealed to me."
Advertisement:

Eric Bana (born 9 August 1968 in Melbourne, Australia) is an Australian film and television actor. He began his career as a comedian in the sketch comedy Full Frontal before gaining critical recognition in the biographical film Chopper. After a decade of roles in Australian TV shows and films, he gained Hollywood's attention for his performance in Black Hawk Down and by playing the lead role as Hulk/Bruce Banner in the Ang Lee-directed Marvel Comics film Hulk with Jennifer Connelly. He has since played Hector in the movie Troy, the lead in Steven Spielberg's Munich, and the villain Nero in the Science Fiction film Star Trek (2009).

An accomplished dramatic actor and comedian, he received Australia's highest film and television awards for his performances in Chopper, Full Frontal and Romulus, My Father. He has performed across a wide spectrum of leading roles in a variety of low-budget and major studio films, ranging from romantic comedies and drama to science fiction and action thrillers.

Tropes relating him include: