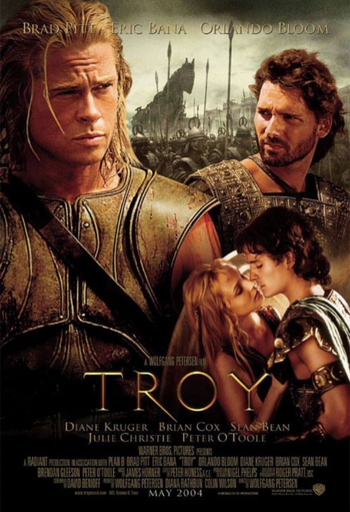 "Men are haunted by the vastness of eternity. And so we ask ourselves: will our actions echo across the centuries?"
— Odysseus
Advertisement:

The 2004 film version of the legend of The Trojan War, directed by Wolfgang Petersen, written by David Benioff and starring Brad Pitt as Achilles, Eric Bana as Hector, Orlando Bloom as Paris, Diane Kruger as Helen, Brian Cox as Agamemnon, Peter O'Toole as Priam, Rose Byrne as Briseis, and Sean Bean as Odysseus in one of his rare not-dying roles.

The film is not technically an adaptation of Homer's Iliad, despite common misconceptions, as it takes material from other sources as well: the movie covers the entire story of the war, from the abduction of Helen to the Trojan Horse and the Sack of Troy, whereas the Iliad deals only with a single episode of the war, the wrath of Achilles and the deaths of Patroclus and Hector. While the Iliad covered only a few weeks of the war, in the process of adapting ten years of war to the screen, the film deviates from the plot of The Trojan Cycle in terms of who dies when in the Ensemble Cast, and focuses more on Hector (who many see as the Hero Antagonist of the story).

Other differences include the downplay of supernatural elements, and Achilles is made into a more honorable (and sometimes womanizing) character instead of a brooding jerkass. While it doesn't try to claim it is "The True Story" of the Trojan War, it is portrayed in a fairly realistic fashion as such that it may very well have happened in a similar way. Achilles is Shrouded in Myth as being a demi-god, but it is later clarified to not be the case; he is merely an exceptionally powerful human.

The fully shot fall of Troy ifnthe film "Troy" (not shown in theater release) shows war in all its horror.

Example of:
Rape, Pillage, and Burn

The fully shot fall of Troy ifnthe film "Troy" (not shown in theater release) shows war in all its horror.