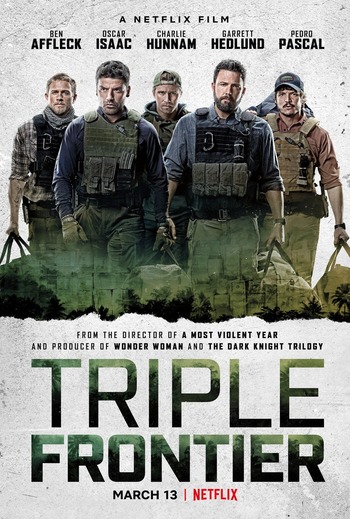 Triple Frontier is a 2019 American action thriller film directed by J. C. Chandor and written by Chandor and Mark Boal, from a story by the latter.

Five friends, all military veterans, reunite for a recon job with the target being Lorea, a ruthless South American drug lord whose compound is located in the Amazon rainforest, near the tri-border between Colombia, Brazil and Peru (hence the title). Once they get there, they decide to rob the millions in cash that Lorea keeps instead. Loyalties are then put to the test, and a chain of unintended consequences are unleashed.

The film was produced by Netflix and released on the service on March 13, 2019. It also had a limited theatrical release on March 6.