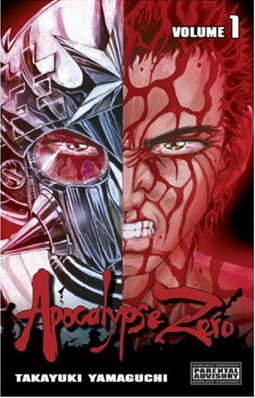 You guys passed up Apocalypse Zero, literally the most insane anime I've ever seen in my life! Seriously, the first time I tried to watch it, I woke up ten days later in a petting zoo in Croatia!
—Bennett the Sage, Anime Abandon
Advertisement:

Apocalypse Zero, also known as Kakugo no Susume, is a manga by Takayuki Yamaguchi and two-part OVA from The '90s. It revolves about Kakugo Hagakure, a warrior of justice who protects a post-apocalyptic Tokyo from the mutants who keep ravaging it. Kakugo fights the with the help of a Powered Armor (powered by 3000 foreign victims of Imperial Japan atrocities) and other grisly technology developed by the former Imperial Japanese Army... But so does Harara, Kakugo's former brother, who leads the monsters to cleanse the world from the humans who destroyed it in the first place.

The series' appeal mostly comes from its eclectic mix of stylistic influences: Henshin Hero transformations and villains straight out of Kamen Rider and the Ultra Series, unsettling imagery inspired by Imperial Japan, glam flourishes for Harara lifted out of Shoujo manga like The Rose of Versailles, ridiculous arrays of over-sexualized monsters with a bizarre cartoony aesthetic that echo some of the stranger demon designs in Devilman, guts-spewing, blood-gushing, skin-melting, bones-sticking-out-limbs Gorn... And, most importantly, an old-school "good versus evil" narrative told completely in earnest, including even a good dose of The Power of Love.

This work, officially described as a "self-indulgent manga", was Yamaguchi's first long series, and it was published from July 1994 to August 1996.

The manga was followed in 2010-2015 by Exoskull Zero, a Broad Strokes distant sequel where Kakugo wakes up from a long slumber and meets other six armored warriors (each one a Hero of Another Story... And Harara.) who may have different approaches to justice than him. It was followed in 2015-2021 by Efu no Shichinin ("The Seven of Efu"), a pseudo-remake/prequel of Exoskull Zero in Edo-era Japan (in the style of the author's own Shigurui featuring cameos from some of his other works.