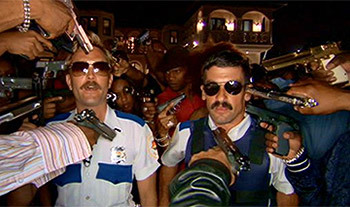 "Oh shoot."
Andy Wainwright: Yeh do know that there are more guns in the country than there are in the city?
Andy Cartwright: Ev'rybody and their mums is packin' round there.
Nick Angel: ...Like who?
Wainwright: Farmers.
Nick: Who else?
Cartwright: Farmer's mums.
— Hot Fuzz
Advertisement:

A crowd of people (patrons in a bar, customers in line at the bank, worshipers at church, etc.), are all armed to the teeth, down to the old lady with a walker, the nun, and the clown with the balloons. Like Everybody Was Kung-Fu Fighting, only with guns, swords, knives, brass knuckles, etc. In other words, a crowd where everyone's a Badass Bystander.

Virtually a given in all Zombie Apocalypse scenarios and libertarian utopias, and frequently the case with Crapsack Worlds, World of Badass, Wretched Hives and people who Had to Be Sharp. When someone makes the mistake of threatening these people not knowing how well-prepared for trouble they are, it's a case of Mugging the Monster (which frequently leads to More Dakka and Multiple Gunshot Death). When there are two separate rival or enemy groups, it's the setup for a Mexican Standoff, which may lead to a Blast Out. This trope sometimes averts Guns in Church, when ordinarily it would be spectacularly inappropriate to carry weapons.

A variation of this is when the hero and the villain meet in a supposedly neutral public place, only to have it turn out that all the bystanders are really the villain's Mooks.