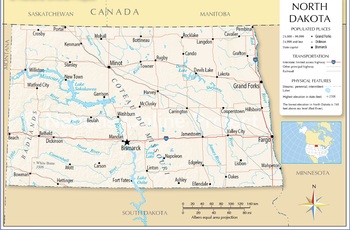 North Dakota is a state in the Great Plains Midwest region of the United States. Bordered by Montana to the west, South Dakota to the south, Minnesota to the east, and the Canadian provinces of Saskatchewan and Manitoba to the north, it has a population of around 780,000, making it the 4th-least populous state and one of 6 states with fewer than 1 million residents. Its capital is Bismarck in the south-central part of the state, while its largest city is Fargo in the extreme east on the Minnesota border.

North and South Dakota were originally part of the unified Dakota Territory, named for the Dakota Sioux nation that has called the area home for hundreds of years (they originate further east in Minnesota and Manitoba). When the time of statehood rolled around in 1889, the Dakota Territory was split due to its size and as a political power play by Republicans; the entire territory was and remains reliably Republican in politics, so splitting the state granted the party two additional senators. President Benjamin Harrison famously shuffled the papers on his desk so no one could tell which Dakota was admitted first, but since North Dakota comes before South Dakota alphabetically, North Dakota is listed as the 39th state and South Dakota as the 40th.

North Dakota abounds with mineral wealth; mining has historically been the state's major industry, and there was a major oil boom in the 2010s that brought a lot of new residents and economic activity, though most people left once the Bakken oil wells dried up. The oil industry, however, is not seen positively by everyone; in 2016, the planned Dakota Access Pipeline, after being re-routed through the Standing Rock Sioux reservation, sparked major protests, especially since the pipeline's planned route endangered the reservation's main source of drinking water. The protests proved politically polarizing; conservatives pointed to the massive potential economic benefits of the pipeline and the need for energy production, while progressives pointed to the potentially disastrous environmental consequences of even a minor leak, as well as Energy Transfer Partners' disrespect for Native American sovereignty in a state that has perpetrated massive abuses towards Native Americans for decades. The heavy-handed response by law enforcement poured additional gas on the fire, and the protests became a cause célèbre among large segments of the American left; sympathizers flocked to the reservation in large enough numbers to form a small city, even requiring a makeshift local government to manage the distribution of food, tents, and generators.