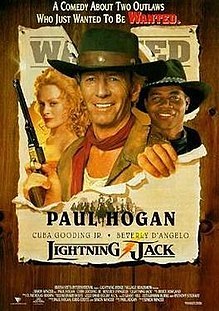 They just wanted to be Wanted!
Advertisement:

Paul Hogan is Lightning Jack Kane, an Australian outlaw in the American West who wishes to be a famous outlaw. However, his plans to become famous get derailed when a botched robbery leaves him as the last member of his gang still alive.

Cuba Gooding Jr. is Ben Doyle, a mute who gets no respect. Most think that he is dumb, and his employer doesn't even help him out.

Their paths cross when Lightning Jack takes Ben hostage during yet another botched robbery. However, when Jack eventually lets him go, Ben decides to stay with the outlaw. Thus, Lightning Jack decides to teach him how to be an outlaw.