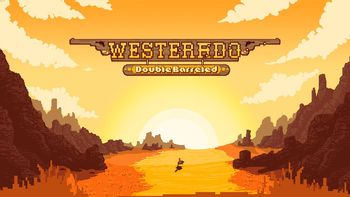 A flash Adventure game set in The Wild West and hosted on Adult Swim Games, Westerado chronicles the story of a young gunslinger out to get revenge on the man who killed his family. The game is free to play and runs in most Internet browsers.

There is also a standalone, high-resolution expanded version of the game known as Westerado: Double Barreled, released on Steam in April 2015.