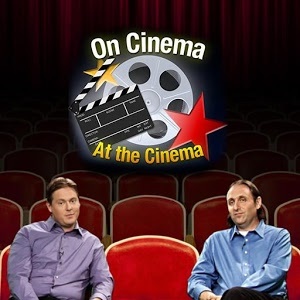 It's On Cinema At The Cinema
Originally a podcast which then became a web series, On Cinema is film related talk show hosted by Tim Heidecker and "guest" Gregg Turkington as fictional versions of themselves. They "review" movies, generally by awarding films bags of popcorn rather than stars. The reviews are almost always highly positive and they never provide any actual critical insight on the movies they discuss. The podcast and show originally aimed to mock the self-indulgence of the podcast community.
Advertisement:

As the series went on, while "reviewing" the movies was still the core concept, Tim has tended to use the show to discuss whatever is on his mind, be it personal issues, alternative medicine, politics and his other projects. Gregg considers himself a film expert generally due to his collection of VHS tapes (usually presented on the show as "popcorn classics") which mostly consists of forgotten films. He desires the show to be exclusively focused on movies and gets annoyed whenever Tim shifts the focus of the show. The series has since incorporated multi-episode arcs and has a spinoff in the form of the Decker where the characters of On Cinema decide to make their own "movie". Tim and Gregg have also made other media appearances as with their On Cinema personas including social media (Gregg's Twitter account is exclusively for his On Cinema persona) and a touring live show. Some plot developments are played out through their social media feeds.

Since 2013, they have had an annual Live Oscar special which often gets chaotic due to Tim's behavior.

I Give These Tropes 5 Bags of Popcorn: