Film / Ant-Man and the Wasp

WARNING: All spoilers are unmarked! You Have Been Warned! 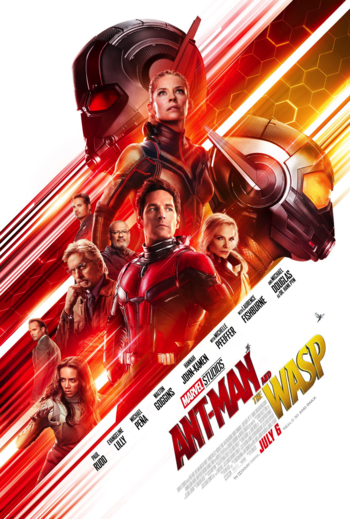 Ant-Man and the Wasp is a 2018 film directed by Peyton Reed and written by Andrew Barrer, Gabriel Ferrari, Paul Rudd, and Adam McKay, based on the Marvel Comics characters of the same name. It is the twentieth film installment of the Marvel Cinematic Universe, the eighth installment of Phase 3, and a sequel to 2015's Ant-Man.

The film once again follows Reformed Criminal and part-time Avengers ally, Scott Lang / the incredible shrinking Ant-Man (Rudd). Or at least he was, until he once again became a criminal for his decision to side with Captain America in Captain America: Civil War. Now he's just hoping to not break probation and spend some time with his daughter.

However, Scott is soon pulled into an urgent new mission by his now fugitive mentor, Dr. Hank Pym (Michael Douglas) — the original Ant-Man — and Pym's daughter Hope (Evangeline Lilly), who's taken on the mantle of The Wasp, previously held by her mother Janet van Dyne (Michelle Pfeiffer). Namely, to save Janet from her decades long entrapment in the beyond microscopic Quantum Realm. But first, the group has to get through a black market tech dealer named Sonny Burch (Walton Goggins) and an intangible thief known as "the Ghost" (Hannah John-Kamen), who both want the pieces of tech our heroes need for their rescue for themselves.

Ant-Man and the Wasp is notable for being the first film produced by Marvel Studios to feature a leading woman character with her name in its title, after 2019's Captain Marvel was pushed back a year to accommodate this film's release date.

On November 1, 2019, a third film in the series was confirmed to be in development

. Peyton Reed will return to write and direct. On December 11, 2020, the title of the third film was revealed to be Ant-Man and the Wasp: Quantumania, which will also introduce Jonathan Majors as Kang the Conqueror and Kathryn Newton as a re-cast Cassie Lang. The film is scheduled to release on February 17, 2023.

Not to be confused with the 2018 comic book also titled Ant-Man & The Wasp, which features Hope's mainstream Marvel Universe counterpart Nadia van Dyne instead of her.

Ant-Man and the Wasp provides examples of:

open/close all folders
Tropes # to C
Tropes D to H
Tropes I to M
Tropes N to R
Tropes S to Y
"Hello? Ha ha, very funny. Hank, quit screwing around, you told me yourself not to screw around. ...Hank? Hope? Janet? Guys? Guys! Okay, seriously, don't joke around, bring me up, let's go! GUYS!"
Feedback