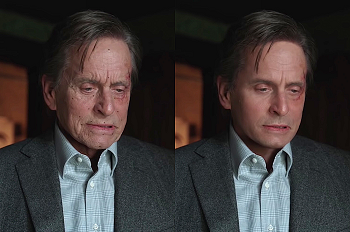 Actors usually aren't the same age as the characters they play. That's just part of the craft. Maybe they're playing the part over a long period of time, maybe they're reprising the part in an earlier time period. But this creates a problem when audiences are expected to believe an actor who is portraying a character who is a good decade or two younger than the actor who plays them.
Advertisement:

For most of film history, the go-to tool for de-aging an actor has been makeup, to varying degrees of success. But modern innovations in CGI have allowed filmmakers to digitally de-age their actors, by digitally erasing wrinkles, mapping footage from the actor's youth onto the modern face, or some combination of the two. It's often a subtle variation of Serkis Folk—expect set images from films employing this technique to have actors' faces covered in plastic dots. It may also be combined with Digital Head Swap, placing the de-aged face on another actor entirely, usually a stunt double who can do things the older actor is no longer capable of or has the body proportions the character is supposed to have while the older actor doesn't have them anymore. It has allowed to mostly avoid the problems of Fake Shemp in a number of modern works.

When well-executed, it can be a nearly seamless visual effect. If done poorly, can be an example of the Uncanny Valley.