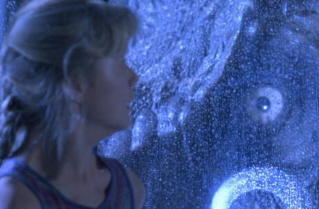 A scene in which a character has a huge eye staring at them. In many cases, the character won't notice even this - at least not until they turn around and find themselves face-to-eyeball. In the case of an Oculothorax the eyeball is all there is!

Not to be confused with The Abyss Gazes Also Into You. Unless it does.