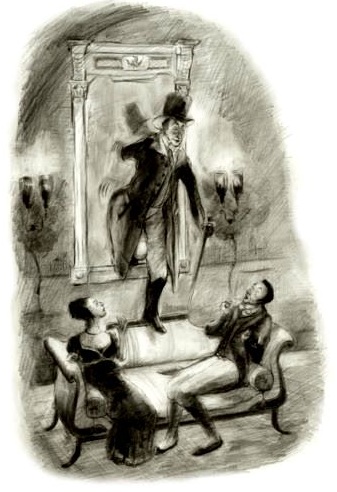 "Can a magician kill a man by magic?" Lord Wellington asked Strange.
Strange frowned. He seemed to dislike the question. "I suppose a magician might," he admitted, "but a gentleman never could."
Advertisement:

Jonathan Strange & Mr. Norrell is the highly acclaimed first novel by Susanna Clarke, published in 2004. The story shews, in historical fashion, the involvements of magicians and fairies in alternate Britain of the Regency era. Being nearly 1000 pages long, the book is well-known (and well-loved) for skillfully combining political intrigue, elaborate academic footnotes and sweet charcoal illustrations.

Centuries ago, magic thrived in England. The Raven King, a human who had been raised in the Land of Faerie, waged war against England and took the northern half for his kingdom. The Raven King was the greatest magician to ever live, and his 300-year reign was the golden age of magic in both halves of England — the union of fairy power and human organization.

By 1806, England has been reunited, and magic is primarily the domain of scholars and theorists. The Learned Society of York Magicians sets out to discover why magic is no longer practiced in England, and finds that there is one practicing magician: the reclusive Mr Gilbert Norrell, who has very particular views on what is and is not proper for an English magician. Norrell's life revolves about his deep love and reverence for academic books, and he feels that it is his duty to restore English Magic and to employ its power in the war effort against France.

When Mr Norrell chooses to go public, this sets in motion a chain of events. In his efforts to ingratiate himself to the London upper class, he secretly calls upon the aid of a fairy: a gentleman with thistle-down hair. Although their encounter is but a brief one, this gentleman soon takes renewed interest in England and comes to deeply love Stephen Black, the servant of government minister Sir Walter Pole. Mr Norrell, oblivious to this particular development, convinces Sir Walter Pole that English Magic might restore the glory of the Kingdom and claim Britannia's victory against Napoleon Buonaparte. Aiding Norrell's political career are two socialite leeches, Mr Christopher Drawlight and Mr Henry Lascelles, who take it upon themselves to guide Norrell — a Socially Awkward Hero at the best of times — through the intricacies of political etiquette.

Meanwhile, a young landowner named Jonathan Strange discovers that he has a natural talent for magic, and begins practising as an amateur. He becomes Mr Norrell's first and only student, but as Strange begins to rival Norrell in ability, their differences in opinion intensify until something must give. And as the war effort progresses, the gentleman with the thistle-down hair becomes convinced that Jonathan Strange is his worst enemy.

Adapted into a BBC drama, with Bertie Carvel and Eddie Marsan in the title roles.