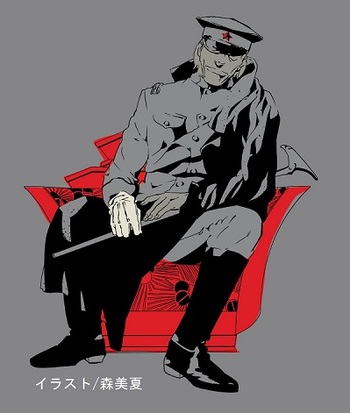 Deceive everything to survive.note In Japanese, Subete wo azamuki, ikinokore.
"There’s a card game going on at the table, but it’s only a charade. The goal is to get people in the room on your side, have them peek at the opponents’ hands, and signal you. However, there’s no telling who’s on whose side. The signs may be fake, or you might read an opponents signs and change your hand. In the right conditions, you can convince the enemy spy to betray his side and join yours."
— Sakuma given an explanation on the Joker Game
Advertisement:

In autumn 1937, Imperial Japan establishes a black ops agency called the D Agency led by Lieutenant Colonel Yuuki of the Imperial Japanese Army. His objective is to recruit and train secret agents who do not have any relations to the military, meaning that the agency takes its recruits from the civilian populace. Its task: to conduct covert operations throughout Japan and overseas against domestic and foreign enemies alike.

Joker Game is a novel series written by Koji Yanagi, consisting so far of four volumes: Joker Game, Double Joker, Paradise Lost, and Last Waltz. Joker Game was originally published on August 29, 2008, with Last Waltz releasing most recently in January 2015. It is published by Kadokawa Shoten in Japan as of 2016. The novels have started an anime, manga and live-action adaptation.

The anime adaptation was done by Production I.G, with music done by Kenji Kawai, direction by Kazuya Nomura, and writing by Taku Kishimoto. It ran for 12 episodes under the Spring 2016 Anime lineup, with two additional OVA episodes included in the show's DVD and Blu-Ray in late 2016. It is available for worldwide streaming on Crunchyroll

and is licensed by Funimation, who produced an English dub. The manga was serialized on February 5, 2016 by Mag Garden, which debuted in Comic Garden, written by Subaru Nito.

The live-action adaptation was directed by Yu Irie and debuted in Japanese theaters on January 31, 2015.

Not to be confused with some game that The Joker had been playing.