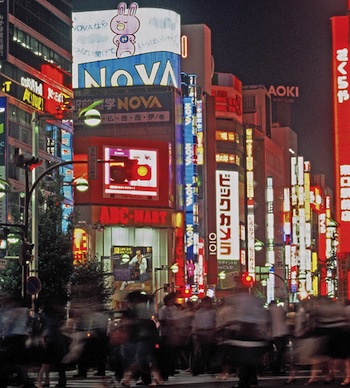 The Center of the Universe, as well as pink bunny neon signs.
Advertisement:

The political and economic center of Japan, Tokyo (東京都 Tōkyō-tō, lit. "Tokyo Metropolis") is the center of the largest metropolis in the world at 35 1/2 million people, roughly 30% of the entire Japanese population. (OK, legally Tokyo is one of Japan's 47 prefectures that encompasses the original city itself as well as the western suburbs and a string of islands up to 1000 kilometers south to Iwo Jima, but the whole place including Saitama, Chiba, and Yokohama is so crowded and built-up it's easier to treat it as a single city.) That's pretty much the reason why Tokyo Is the Center of the Universe as far as Japanese media is concerned.

A History of the Center of the Universe

Up to the end of the 16th century, it was a small fishing village called Edo (江戸). The political center of Japan at the time was in Kyoto, while the economic center was in nearby Osaka - both located in the Kansai Plain. The Kanto Plain, where Tokyo now resides, was at the frontier of Japanese civilization (the "Wild East", as it were.) Following the Sengoku Jidai, Tokugawa Ieyasu set up shop in Edo because of its rich farmland and made it his center of power. The capital was still officially Kyoto, and the Emperor still lived there, but the true power in the 17th through mid-19th centuries was in the Tokugawa Shogunate's hands. Tokugawa Iemitsu, Ieyasu's grandson, established the policy of sankin kōtai ("alternate attendance"), which required every daimyō to reside in Edo every other year.

When Commodore Matthew Perry arrived in 1853 in his Black Ships, Japan realized just how far behind they were compared with the "barbarian" West, and set upon a crash modernization program. By this point, Edo had grown to a million people, and when the capital and the Emperor were transferred to the city it was renamed Tokyo, which literally means "Eastern Capital" (東京).note Incidentally, Kyoto was renamed Saikyo (西京, "Western Capital") for a short time, and the area around Nagoya, which lies about halfway between the two cities, is sometimes known as the Chukyo Area (中京, "Central Capital".) 北京 ("Northern Capital") and 南京 ("Southern Capital") are, respectively, Beijing and Nanjing, in China while ancient China also used the east, west and central capital namings periodically. From here on, Tokyo (really all of Japan's cities) exploded in growth as the nation industrialized.

Tokyo had its share of disasters - the Great Kanto Earthquake of 1923 caused massive fires all over the city (it struck around lunchtime when people were cooking, and buildings were made of wood because said earthquakes discouraged building with heavier materials), and during World War II it was the target of many Allied air raids, the most (in)famous of which were firebombing runs. Tokyo wasn't the only city that got torched, but as the largest city and with so many buildings made of wood, those bombing runs killed more people (directly) than even the atomic bombs dropped on Hiroshima and Nagasaki. This is part of the reason why The Tokyo Fireball is used so often in Japanese media - it's been such a part of their history (not that it's good or that it was just World War II that placed it in the collective consciousness.)

After the war Tokyo and the rest of Japan rebuilt themselves. Foreswearing war as a political tool (Article 9) and reliant on the US for defense in the Cold War, Japan set about dominating the world economically. The Japanese economic miracle in the 1960s and 70s was hailed as a triumph of capitalism, and Tokyo as the central engine of it rode the boom to the top of the world's greatest cities. The city felt the effects of success in the 1980s when real estate in Tokyo began to reach truly mind-boggling heights - by 1989, office space in Ginza, Tokyo's main business district, reached the price of 100 million yen (US$1 million) per square meter.note Extrapolating from this, various newspapers have calculated that the real estate value of the Imperial Palace and Grounds in downtown Tokyo is greater than the entirety of the State of California. Corporate Japan felt invincible, and most of the US was inclined to agree.

The bubble burst, the Nikkei (the main stock index for the Tokyo Stock Exchange) tanked badly, Japan's economy hit turbulence, and thanks to the Japanese government's closeness with its business (the very same closeness that enabled Japan to rocket out of World War II's destitution in the first place), it did too little too late to turn it around in time. Japan's economy experienced two decades of stagnation — two "Lost Decades". For Tokyo's part, its real estate price fell to just 1% of that 100 million yen figure in 1989.

Still, Tokyo continues to grow even as Japan as a whole ages and its overall population declines.

Now for the A-ward Ceremony

As mentioned before, Tokyo is legally one of Japan's 47 prefectures. Other prefectures are subdivided into cities, towns, and villages; so is the western half of Tokyo Prefecture (the Tama Area). The eastern half, however, is divided into 23 special wards (特別区, tokubetsu-ku) - before 1943 this area was known as Tokyo City (along the lines of Kyoto and Osaka Cities) before the government reorganized it.

The special wards act much like municipalities elsewhere in Japan (they elect their own mayors and city councils) but they don't have quite as much control over their area as regular municipalities - they can't pass their own laws, for instance. Local councils do promote the local economy and take care of things like car registration (That Other Wiki compares the situation to the boroughs of London), mainly using money granted to them by the metropolitan government. Confusingly, each special ward titles themselves as a "City" in English (e.g., "Chiyoda City").

The rest of the Tokyo Metropolis is made up of several other cities (市 shi) collectively known as the Tama (多摩) Region.

Further to the west is the mountainous, sparsely-populated Nishitama District (西多摩郡, Nishitama-gun), made up of 3 towns (町 machi) and 1 village (村 mura) rather than incorporated as cities:

Tokyo also has incorporated several islands south of the Japanese main islands as part of 4 Subprefectures (支庁 shichō), which in turn are divided into 2 towns and 7 villages. These comprise the Izu Islands and the Ogasawara Islands (also called "Bonin Islands" in English sources).