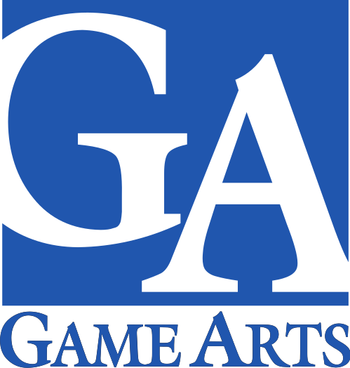 Game Arts Co., Ltd. is a Japanese video game developer based in Tokyo and founded in March 1985. The company found success in its earliest years exploiting the unlikely market for action-oriented games on the PC-8801mkIISR, most of which were brought to Western computers by way of Sierra.
Advertisement:

By the 1990s, the company had made a transition to console game development, creating many of their best-known RPGs and other games for the Sega CD and later Sega Saturn. The U.S. releases of some of these games benefitted from the painstaking localization efforts of Working Designs. From 1997 to around 2001, Game Arts was a member of Entertainment Software Publishing, a venture founded to pool resources to help companies such as itself, Sting Entertainment and Treasure compete in the next generation of video games.

In October 2005, following a period of declining fortunes for the company, Game Arts was acquired by Gung Ho Online Entertainment, who hosted the Japanese servers for the MMORPG Ragnarok Online and later acquired that game's original developer, Gravity Co.

Games developed by Game Arts include: