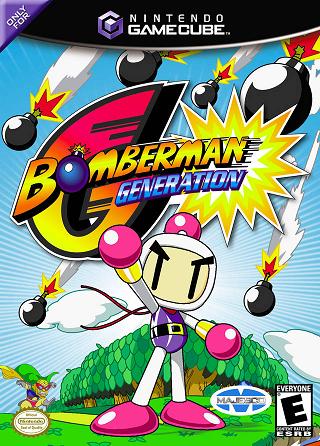 "In the infinitely
expanding universe...
This is where energy
unfathomable...
...to human kind is
overflowing...
In the search for this
unknown energy...
...many researchers have
challenged outer space...
...The time is
Cosmic Year 200X..."

Bomberman Generation is the first Bomberman title for the Nintendo GameCube, released in 2002. Developed by Game Arts, it was the fourth fully-3D game in the series following the Nintendo 64 titles.note Bomberman 64, Bomberman Hero, and Bomberman 64: The Second Attack!. Fifth if you include the Japan-only Saturn Bomberman Fight!! for Sega Saturn.

In the story, Professor Ein sends a space freighter to collect the "Bomb Elements", six crystals with unfathomable power, to bring to Planet Bomber so he can study them. However, Mujoe of the Hige Hige Bandits hired the Crush Bombers to attack the freighter, scattering the crystals across Planet Tentacalls; the villains are on the move to find and collect the crystals. Ein sends Bomberman out to fight them off, lest they find the Bomb Crystals and send the universe into peril.

The game had a Spiritual Successor in the form of Bomberman Jetters, which played like a watered-down version of Generation while being a Recursive Adaptation of the Bomberman Jetters anime.