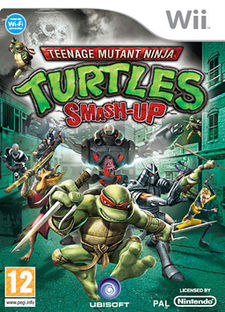 Teenage Mutant Ninja Turtles: Smash Up is a 2009 Platform Fighter for the Wii and PlayStation 2, based on the long running Teenage Mutant Ninja Turtles franchise, developed by Game Arts (who were also one of the companies behind Super Smash Bros. Brawl), with help from ex-Team Ninja employees, and published by Ubisoft. Unlike most TMNT games, this one is a general representation of the franchise, with very little explicit nods to any particular continuity beyond the art style (taken from the CGI film) and voice cast (which is that of the 2003 series).
Advertisement: