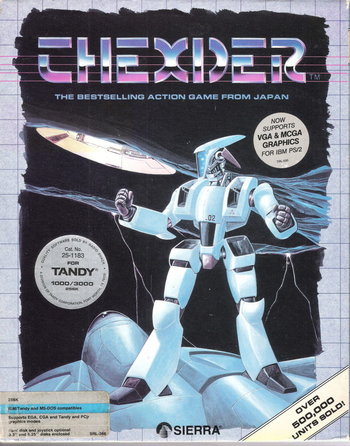 Thexder is a 1985 video game, the first title ever released by Game Arts. It is possibly one of the most fondly remembered shooters of the 1980s.

The game's premise is fairly simple: the player takes control of a "hyper dual armor" and has to find his (or her) way through, depending on the version, either ten or sixteen levels of enemy-filled mazes, eventually reaching the facility's power core. Thexder's only weapon is an auto-targeting laser (at least, auto-targeting in mech form); its only defense is a short-lived defensive barrier. Both the laser and the shield draw on Thexder's limited power supply, which is drained even faster by enemies running into you - and there are a ton of them.

Fortunately, there were ways to increase and replenish Thexder's energy reserves - primarily by killing the right enemies.

Originally released in Japan for NEC's 8-bit computer, the PC-8801mkIISR, Thexder became a smash hit and Game Arts responded by porting it to other computers, including the MSX. The then-obscure company Squaresoft took note, licensing Thexder for a port to the Famicom, their very first game for Nintendo; Sierra On-Line also took an interest, and was responsible for the rest of the world finding out about this pleasantly unique Japanese game. (Sierra advertised Thexder as an "arcade game" though it never appeared in arcades; Sierra also misleadingly claimed that the game was "created for second-generation computers with 16-bit processors.")

Four years after the original release, Game Arts returned to their debut title with Fire Hawk: Thexder the Second Contact, expanding on the original game's story (not that there was much of one) and improving the character's choice of weapons, while simultaneously upping the ante with more missions, more enemies, and plenty of bosses along the way. Sierra On-Line also distributed this sequel.

Given Thexder's popularity, Sierra On-Line decided to make their own spin-off for Windows 95, informally called "Thexder 95," without Game Arts's involvement. With the rise of retro remakes, though, Square Enix shepherded the remake Thexder Neo to market as a downloadable game for the PSP, resurrecting Thexder for a new generation of gamers to discover.

The Thexder games provide examples of: