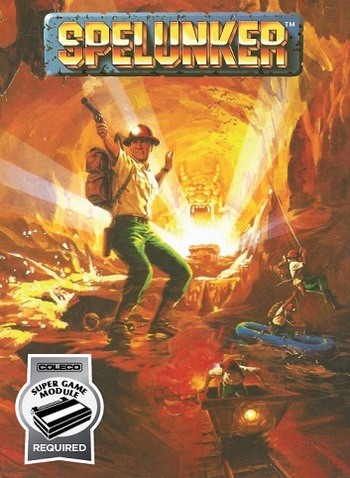 Classic video game created by Tim Martin in the early 1980s and published by Brøderbund. Spelunker is about, as you'd expect, a guy who explores a large cave and looks for treasure. He has dynamite to help him blow up large rocks, flares to ward off bats, and a limited air supply. Adding a bit of fantasy to the game is the frequent appearance of ghosts, which need to be warded off with an air blaster. A pretty simple game.

Except for one thing: its sadistic level of difficulty.

The spelunker himself can die very easily from a wide variety of things, including some you wouldn't expect:

That one involving falling is particularly nasty, due to the game's play mechanics. The spelunker can only jump a short distance, can't change his direction in midair, and falls straight down instead of slightly forward when walking off an edge. Your jumps must be very precise, or you will die from the fall - in midair, no less.

On the original 8 bit computers, it was fairly well received, but the NES game was widely forgotten in America, but became a Cult Classic in Japan due to its hilariously unforgiving difficulty and the ludicrous weakness of the player character. The game ended up being returned to used video game stores in high numbers when players got frustrated with it, but later developed a following among fans of Nintendo Hard games. As a result, there have been several Japanese fangames, and even a remake for Playstation Network in the form of Spelunker HD, which adds multiplayer play and cartoony animations mocking the deaths, but also adds a lot of lives and a save feature to soften the blow. More recently, Spelunker Party was developed for Steam and the Nintendo Switch.

The game actually inspired a Japanese expression: スペランカー体質, literally "constitution of a spelunker", which means someone who gets hurt badly from minor injuries.