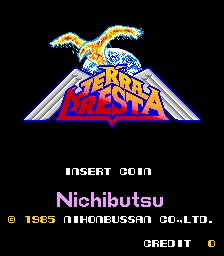 Shoot things, and turn your ship into a Phoenix.
Advertisement:

Terra Cresta, or The Cresta Series is a series of Shoot 'em ups by Nichibutsu, that started with Moon Cresta in 1980.

In each game, you pilot a different ship. The main thing each ship has in common is access to various power-ups that increase your firepower, but often render you more vulnerable due to the increase in the size of your ship's hitbox, and getting hit will cause you to lose all upgrades and revert back to the basic ship. The drawback here is that Power-ups have to be acquired in a certain order, which can make things a little frustrating for some.

The game received multiple ports, with the most recent one being Arcade Archives: Terra Cresta by Hamster in 2018 for PlayStation 4 and Nintendo Switch.

A sequel, Sol Cresta, by PlatinumGames (yes, that PlatinumGames) in collaboration with Hamster was released on February 22, 2022 for PS4, Switch, and Windows PC (via Steam).